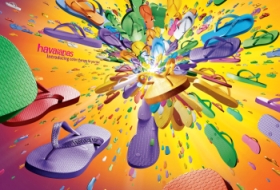 Flip-flop giant Havaianas filed an opposition against the European application Bahianas. This application has been formed by the Brasilian sambatown Bahia and the suffix nas. Probably, Bahianas had a good look at the trademark Havaianas before launching their mark.

Will the copying of an idea (geographical indication plus NAS) be sufficient to constitute trademark infringement? No, says the European Trademark Office. This Office decided that although both trademarks are similar on a phonetical level, they are visually and conceptually dissimilar. Therefore the relevant public should be able to distinguish Bahianas from Havaianas.

It is anyway a harsh time for Havaianas, earlier this year an opposition against Cubanas was lost in New Zealand.