Isabel Marant has created some of the most copied footwear in the world; her Bekkett trainers are copied by many. But now the French designer is the one who has been accused of copying. The accuser: adidas.

Marant’s Bart low-tops seem to be very similar to adidas’s Stan Smiths, especially with the red tabs at the heel that give a very similar overall impression.

From a copyright point of view there might be some merit for adidas, according to The Fasion Law: “Given adidas’s federal registration and because the Isabel Marant Bart shoe employs a very similar design element, the heel tab – one that is arguably employed by Adidas to serve as an indication of source – Adidas very well may have a merited infringement claim. After all, the two brands’ heel tabs look pretty similar.”

From a trademark point of view, the question is whether consumer are likely to be confused by Marant’s trainer (EUR 300,-) and will mistake them for adidas’ trainers (EUR 80,-). And since adidas have been collaborating with designers in the past, it is not unlikely that customers could assume that the Marant shoes have in fact been created for adidas. 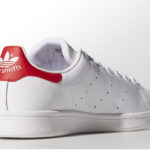 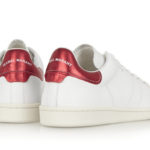