This week we posted that you are not allowed to take picture of the Eiffel Tower by night. But this Parisian landmark is not the only famous thing you may not commercially exploit. A top five of no-go’s when you’re on vacation: 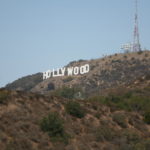