The newest cover of National Geographic magazine was named iconic almost immediately after publication. The cover shows the plastic pollution of the ocean in a striking way: it appears to be an iceberg, but underwater it is a plastic bag. But the image has allegedly been blatently copied.

Matus Bence, a Slovak graphic designer, noted on Twitter that he created a very similar image for the American supermarket Tesco in 2015, for a campaign that wanted to prevent the unnecessary use of plastic bags.

National Geographic Netherlands responded that: “The image that was used was made last year by an artist from Bolivia. In 2017 he won a prize here and the jury did not judge at the time that plagiarism was committed. National Geographic used the image for the cover, because it is rare that the entire theme of plastic pollution is captured in one image. Has one artist plagiarized the other? We are, like the jury that judged the image last year, of no opinion.”

The execution of the idea is very similar: the bags are very similar, the color and position of the sea and the sky also match. There are a lot of original elements in the photos, which likely constitutes an unauthorized copy. 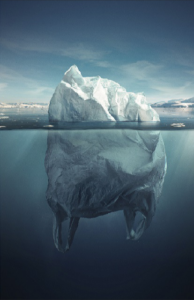