Louis Vuitton is taking two Chinese shoemakers to court for allegedly copying the design of its popular Archlight sneakers.

The French fashion house is suing Belle International (China) and Best Able Footwear — both subsidiaries of Chinese shoe giant Belle International — for copyright infringement, accusing the companies of manufacturing and selling sneakers that it says look substantially similar to its spring ’18 style.

LV’s Archlight sneakers retail for $1,090 and have been a celebrity favourite since they launched last year.

Belle International began selling its alleged lookalike style in July 2018, according to the documents. Louis Vuitton is asking the court to order the companies to stop selling the products in question and for the existing merchandise to be handed over or destroyed. It is also seeking damages in an amount to be determined.

Belle International owns more than a dozen shoe brands, including Staccato, Joyce & Peace and Mirabell, and on its website, it says it is China’s largest footwear retailer. The company was taken private by a consortium of investors in 2017 in a deal worth 53.1 billion Hong Kong dollars (about $6.8 billion). At the time, it operated more than 20,000 stores in Mainland China, along with around 200 in Hong Kong and Macau. 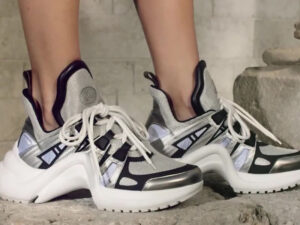 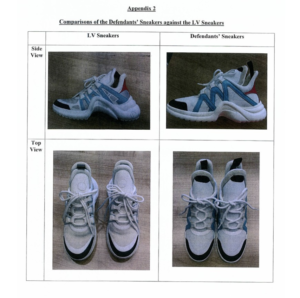