Game developer Rockstar Games has been sued by detective agency Pinkerton Consulting & Investigations because the name of the company is used in the game Red Dead Redemption 2.

The detective agency sent a summons letter to Rockstar Games as early as December 2018, claiming that it has used the name without permission and gives a negative image of the company in the game. Pinkerton National Detective Agency had existed as a detective agency since the 1970s and then worked with the government to find notorious criminals.

Pinkerton states that the game now creates the impression that the detective agency is affiliated with ‘Red Dead’ even though no permission has ever been given. The company is convinced that the characteristic character will be blurred and the reputation of the company will be damaged.

In response, Rockstar has now gone to federal court and is responding to the letter by saying that the use of the name is covered by the First Amendment to the U.S. Constitution. Rockstar reports that Red Dead Redemption 2 is a ‘historically accurate video game set in the Wild West at the end of the 19th century’. Rockstar adds that ‘historical references at every level are interwoven into the game’. 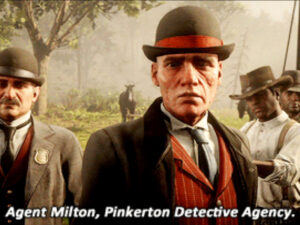