Today, on Valentine’s Day a special IP case regarding a heart. But it’s not heartwarming.

Boston Magazine’s May 2013 cover image by photographer Mitchell Feinberg depicted running shoes from Boston marathoners shaped into a heart. A gorgeous artsy image. But following this cover, to promote the upcoming Bath Half Marathon 2014, Bath Magazine in the UK printed a cover image almost identical to the Boston edition.

The Boston cover was reproduced in poster form with all proceeds, around $125,000, benefitting the One Fund, a non-profit dedicated to supporting families affected by the tragedy.

The Bath Magazine cover caught fire when it was tweeted. The attention did not go unnoticed by Boston Magazine. Carly Carioli posting on the magazine’s web site issued the following press release asking that the Bath Magazine follow the original cover’s altruistic inspirations with a donation to the One Fund. Bath Magazine issued a public apology on their twitter account earlier today which has seemed to do little to mitigate the anger from Bostonians posting on twitter. 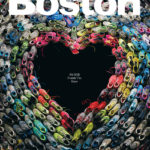 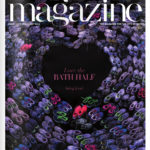