FIFA president Sepp Blatter. Until recently the most powerful man in football. His presidency has been overshadowed by claims of corruption, especially with regard to the appointment of the World Cup 2022 in Qatar.

It is going to be freakishly hot over there in summer – leading to FIFAs back-up plan to move it to the winter, messing up the whole European football calendar. Also, building the necessary football stadiums and accommodations has already led to many deaths amongst construction workers.

The World Cups main sponsors, McDonalds, Coca-Cola and Visa, have also communicated their worries about the claims of corruption, but – for the time being – still remain sponsors.

The question is whether FIFAs bad reputation is going to rub off on the main sponsors. Although this is indeed a risk, backing out of the sponsorship is also a big risk. Imagine Coca-Cola ceasing its sponsorship of the World Cup; Pepsi will take its place in the blink of an eye. This is probably an even bigger risk than a damaged reputation.

At least FIFAs corruption has inspired illustrators and designers worldwide to use the big brands as a means of protest. See some great examples here: 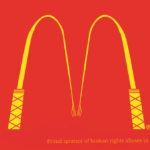