Who can beat Ajax? 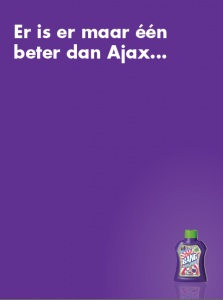 Upcoming Sunday promises to be one of the most exciting climaxes of the Dutch Soccer League (Eredivisie). A direct confrontation between Ajax and FC Twente, the nos. 2 and 1 of the League. Only one game left and just one point difference between the two teams.

Advertisers are already playing along in this race. Cillit Bang’s ad links that with Ajax and of course reminiscent of the Ajax cleaners. “There is only one better than Ajax”, the Cillit Bang-ad reads.